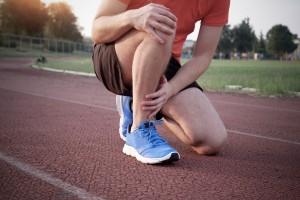 The extracorporeal generated shock wave therapy (ESWT) is the golden standard worldwide to treat urolithiasis. Nowadays, its curative effect is used for many other indications like musculoskeletal diseases, e.g. calcaneal spur, calcified shoulder, patella-tip syndrome,  pseudoarthrosis and even bone fractures.

Reasons for sports injuries are many and varied, dependent on the type of sport. Beside acute injuries (fractures, sprains etc.), particularly over-use problems (tendinopathies, degenerative diseases etc.) are becoming relevant during daily pratice of a sports physician. Is the actual burden exceeding the individual loading limit of the connective and supporting tissue of the athlete, it will lead to muscle- and tendon irritations, joint pains, inflammation and/or stress fractures. To avoid irreversible damages of soft tissues and joints, specific diagnosis and treatment is necessary. Particularly, professional athletes often suffer from long time existing chronic complaints.

The original application of extracorporeal shock waves in medicine was the destruction of kidney stones by lithotripsy in 1980. During this procedure the tissue is exposed to high acoustic energy and much effort was spent to investigate its potential side effects. In consequence, destructive but also regenerative effects were observed 1. A dose-dependent effect was detected with high energy leading to more destructive effects and lower energy leading to more regenerative effects in the treated tissue 2,3. In the early 1990s, extracorporeal shock wave effects on bone and soft tissues led to indication of this treatment in musculoskeletal disorders 1. Since 2007, defocused shock waves were subjected to soft tissue indications with promising success 4,5.

Although the precise biomolecular mechanisms of shock waves in tissues are still under investigation, the underlying principle of its effect can be based on a mechanical stimulation that becomes transformed into a cellular regeneration and growth-associated response. In recent years, the field of “mechanobiology” emerged in the scientific field and researchers began to analyze the cellular effects of physical stimuli and to elucidate this mechanotransduction by which cells and tissues adapt their molecular behaviour due to mechanical signals 6. A quantity of mechano-sensitive molecules and cellular components that are involved in mechanotransductive biochemical responses have already been identified, such as stretchactivated ion channels, caveolae, integrins, cadherins, growth factor receptors, myosin motors, cytoskeletal filaments, nuclei, extracellular matrix, and numerous other structures and signaling molecules 7,8. It has been shown, that extracellular vesicles are released by mechanical shear stress and transfer miRNAs between cells 9,10. New evidence indicated that the mechanical stimulus of shock wave treatment causes exosome release of cells in vitro and is translated into a direct biological response leading to endothelial proliferation and angiogenesis (presented and published at the 4th ISMST basic research meeting in Vienna 2016 by Tepeköylü C et al., and the 20th international congress of the ISMST in San Sebastian 2017 by Graber M et al.) 9. 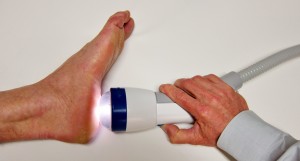 Therefore, SWT can help to

ESWT appears to have differential effects on peripheral nerves and has been proven to promote axonal regeneration 67. Both behavioral and immunohistochemical data show that shock wave treatment accelerates the recovery of muscle sensitivity and functionality and promotes regeneration of injured nerve fibers 68,69. SWT induces endogenous progenitor cell recruitment and Schwann cell activation which coincides with angiogenesis, tissue, and nerve generation in neurovascular injuries 70. Evidentially, shock waves do not threaten peripheral nerve integrity during treatment of muscles 71,72.

In the central nervous system, SWT promotes VEGF expression and improves locomotor recovery after spinal cord injury 73. It also increases the expression of neurotrophin-3 and neurotrophin-3 mRNA, and daily therapy facilitated the activity of macrophages and Schwann cells, which improves the survival and regeneration of neurons 74.

Chronic myofascial pain syndrome (MPS) and trigger points are the main causes of pain in the back, neck, shoulder and limbs. Symptoms are due to hyperirritable nodules in musculoskeletal fibers that contract tightly and cut off their own blood supply, thereby impairing the sensory nerve endings (referred to as „metabolic crisis“) 78. Although the biomolecular basis of shock wave mechanisms are still not clear, the clinical evidence suggests that SWT could reduce the pain of MPS by pain signal alteration, promoting angiogenesis and increasing perfusion in ischemic tissues induced by sensitization of nociceptors and muscle ischemia 79.

The inclusion of Spark Wave Therapy into the individual treatment programs reduces the period of disability in sports and rehabilitation time of the patient.